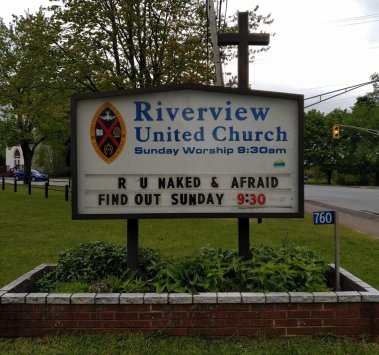 Do you have any idea how hard it is to find a Biblical image when you google ‘naked and afraid?’ And I know that some of you shook your heads if you say the sign before it was changed to highlight Marita’s funeral. But naked and afraid is Biblical!

It’s not often that I choose two ‘First, or Old’ Testament readings. As Christians, it’s important for us to hear words of Jesus or about Jesus, but the First Testament has some grand sweeping stories of God’s people. So, out of a possible 6 passages for today, I chose these two. The first one from Genesis, the first book from the library we call the Bible. This passage tells of a very intimate God, one who seeks out and calls to the first people. Let’s listen as this part of story is revealed as written in Genesis 3: 8-15.

8 During the cool part of the day, the Lord God was walking in the garden. The man and the woman heard him, and they hid among the trees in the garden.

9 The Lord God called to the man and said, “Where are you?”

11 God said to the man, “Who told you that you were naked? Did you eat fruit from that special tree? I told you not to eat from that tree!”

12 The man said, “The woman you put here with me gave me fruit from that tree. So I ate it.”

13 Then the Lord God said to the woman, “What have you done? She said, “The snake tricked me, so I ate the fruit.”

14 So the Lord God said to the snake,

“You did this very bad thing, so bad things will happen to you.
It will be worse for you than for any other animal.
You must crawl on your belly and eat dust all the days of your life.
15 I will make you and the woman enemies to each other.
Your children and her children will be enemies.
You will bite her child’s foot, but he will crush your head.”

Naked and afraid! From the sounds of this interaction with God, I would be afraid too. As you can tell, they have both just disobeyed God by eating of the fruit of the tree of life. The man blames the woman, the woman blames the snake and the snake gets the punishment!

Dr. Melinda Quivik, has this to say about this passage, “From the beginning of this scene – we hear an astonishing aspect of their relationship. The first sentence tells us that the Lord God walks in the garden. God has come to the place where people are living. It is a pleasant scene in which God walks in the evening breeze without a hint of what seems a bitter denunciation to come. God seeking-out-creation governs the action. The story then gives us a number of pithy theological questions to ponder. Since God seems not to know where the humans are, does this mean God is not omniscient? Full text here.

Setting aside the centuries of built up prejudices about this particular passage, instead, think about God who calls to the humans, seeks them out. And what their response is… and what our response might be… In the same way, God still calls to us… seeks us out… invites us into a deeper relationship with God. In this particular passage, God is calling to adults, physically mature, and fit for procreation, but is that the only ones God calls? Listen to this story of God calling as written in 1 Samuel 3: 1-10

Samuel, a young boy, serving the Eli in the temple, hears a voice calling him. He doesn’t recognize the voice as God’s… he thinks it is Eli calling him… in fact three times doesn’t recognize it. But God is persistent and keeps calling, until we hear Samuel say in response, “Speak, for your servant is listening.” Sometimes we mistake God’s voice for our own desires.

Sometimes we mistake God’s voice for doing what is most expedient. How do we distinguish between our desires, what society tells us and God’s voice? Well, you know, sometimes those all align! But that I think is the exception rather than the rule.

What might God be calling to us today? And don’t start thinking that God isn’t calling you to something… because God calls all of us. Some of us respond enthusiastically and some of us respond reluctantly… But if we are open to hear the call we will eventually respond. For some of us it may take longer and we may initially run away and try to escape from the call. And others jump right in, confident that they will learn what is necessary to live out their call. It’s not always easy to discern whether it is God’s voice calling… but if the call is the way of inclusiveness… the way of equality… the way of expansive love… we can be pretty sure it’s God’s voice.

If we were only to read parts of the Bible, we would believe that God is an angry God, quick to doom humanity. But a more expansive reading will demonstrate that God over and over again calls us into relationship… not a relationship of fear… but one of love. One that is demonstrated in the life of Jesus. Of course, we live with consequences.  Not God’s wrath… but the predictable and inescapable results of our behavior. On a global level there are consequences to things like continued clear cutting of our forests and overfishing.

David Suzuki comes to mind as a modern day prophet around climate change. I have no idea what religion David Suzuki follows or if he follows any religion, but in my eyes, he is a prophet… calling us back to living in a way that supports all life, plant, animal, trees, air, ocean and people.

Those early disciples did leave their day jobs behind… and if you imagine that that’s what following Jesus requires, then it is limited to very few people. One of the things I think we tend to forget is that further on in the gospels, after Jesus death and resurrection, the disciples returned home… home to their families, home to their livelihoods, home to their everyday life.

And they shared the Good News of Jesus in their daily lives. I wonder if we could think of this hour on Sunday as the time we spend with Jesus? A time when we learn about and experience Jesus? And then share that Good News with others during the week, in our ordinary day to day lives. In this time of declining church attendance and increasing secularity, we may be uncomfortable sharing our faith with others. For one thing, most of us have never been taught how to do it and we certainly plan on going knocking on doors. J  And we don’t have to… what we do have to do is find a way to share the Good News of following Jesus in a way that is right for us. God calls each one of us… what is God calling you to do?

Thanks be God for the challenge and the opportunity of following Jesus, amen.

3 thoughts on “Naked and Afraid”