I drive past Camp Hill Cemetery quite regularly in my travels around Halifax, and as a minister, I have occasionally presided at graveside or committal services there. Camp Hill Cemetery is the second oldest cemetery in Halifax, the final resting place for many of the city’s elite; you can read more about it here. I have frequently promised myself that one day I will explore it a bit. 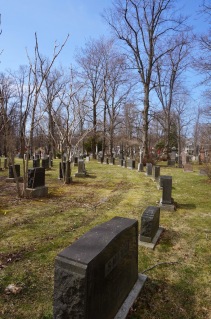 This past week, between a doctor’s appointment and meeting a friend for lunch, I had the opportunity to do so. And in doing so, I made two discoveries: the middle of the cemetery is made up of concentric circles, almost as if it is laid out in the shape of a Celtic Cross. Given the Scottish history of Halifax it is quite possible that this is the case.

The other was this unique headstone. It looks like a window frame in a church, but with the centre removed. I wondered if this was purposeful or had the centre part fallen out some time in its history? What message does it convey?

Most headstones are very solid, as if to say, “I was here and here I am and this is the end!” This one on the other hand seems to invite one to ponder what is on the other side. Its very openness invites one to be drawn into the mystery that is death. Its unique shape had me pondering life and death and life again. I believe in life after death, even as I have no idea what that life may be like. The curved shape and the tree or flower like opening seem distinctly feminine. As much as it looks like a window, it invites me to pass through it like a doorway. What lies on the other side? What lessons does the other side have for us?Whatever markings were on it are long since worn away by wind and rain and salt air. Does it mark a woman’s grave? A man’s? Its placement close to the centre of cemetery tells us that it is one of the earlier graves.  Whoever you are and wherever you are, blessings on your continuing journey.

And that’s my window on God’s world.

One thought on “Death: The Final Frontier”