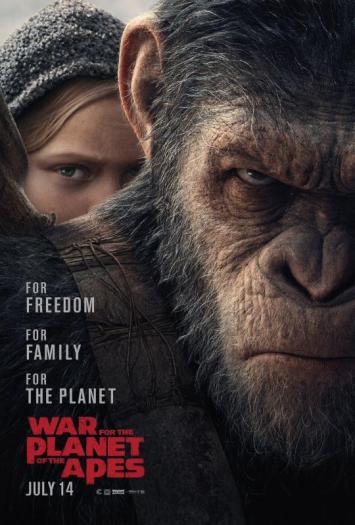 Spoiler alert: If you haven’t seen it and plan to, don’t read any further.

In the movie, humans have been decimated by the ‘Simian Flu’ which renders them apelike, the only survivors some military regiments, one of them led by ‘The Colonel.’ Woody Harrelson, as the Colonel is scary, scary like white white supremacists always are, adorned with a prominent cross,  sunglasses that often obscured his eyes, expecting and exacting blind obedience. His followers are like the worst of blindly obedient troops, reminding me of rallies of both Hitler and Trump. He is waging war on the apes after his son contracted the Simian Flu and he killed his son himself rather than become an ape.

There were a number of things that struck me in the movie and I found myself wishing that I had chosen it for one of the ‘Reel Theology’ series this summer, even though I am presently on vacation.

There was only One. Female. Human. Character. And she was an orphaned girl who cannot speak! Seriously! Apparently no other female humans have survived. On a side note, I am not sure why the humans are trying to kill off the apes if there are no human females around to continue humanity? I found myself wondering if director Matt Reeves thinks women should be childlike, dependent and silent? Why else would there be no other women depicted in the film? And the only two ‘ape’ women were identified by the fact that they wore earrings.

There were a few overlapping Biblical narratives, which were not congruent, and which might escape many viewers unless they were familiar with the Bible. Two that stand out in my mind: ‘Caesar,’ the leader of the apes is whipped and hung on a cross because he is advocating for food and water for the apes in order for them to continue working. The whipping and hanging is reminiscent of Jesus and it is Lake, his daughter in law, who starts working again in order to stop the beating. This reminded me of the faithful women that were part of Jesus’ life. Those women who accompanied him his entire journey, those women who stayed at the cross when all his other friends had fled, those women who went to prepare his body for burial. Determined, steadfast presence.

There is word that a safe haven for the apes exists across the dessert; it’s a long journey, fraught with peril and when they arrive, Caesar dies just as he gazing into the Promised Land. Can you say Moses boys and girls?

I went to the movie expecting to find a narrative of human superiority and gratuitous violence, which are very much present. What I didn’t expect to find was links to the biblical narratives.

One thought on “War for the Planet of the Apes”

Follow My Window on God's World on WordPress.com
Join 662 other followers