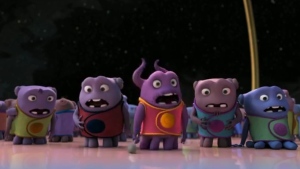 I took my youngest granddaughter to see the movie Home last night. I had seen the trailer and thought we would both enjoy it and we did. Another memory created, along with the blue tongue from the cotton candy and making pancakes with her this morning.

I have a hard time turning off my analytical brain, especially around the portrayal of gender in movies simply to enjoy them. Girls in children’s movies are usually portrayed as needing rescue by a handsome prince; they are usually passive, and they are usually few in number.

Without giving too much away, I was pleasantly surprised to find that in Home, the teenage girl Tip and Oh, one of the Boov, rescued each other in turn. Tip is definitely not passive.

However, I found it interesting that of all the androgynous Boovs that were part of the movie and there were THOUSANDS, the ones who spoke all had male voices. There was only one Boov who was identifiably male and yet male voices dominated even in a movie with a young female protagonist.

Kudos to DreamWorks Animation for creating a great female role model for girls, but how long will be before the male voice is not the default norm?